... A virtual pilgrimage to Lourdes, France – The factual content in this site is truly compelling, and among the most complete found anywhere on the web ... For pilgrims, the definitive site, filled with a remarkable collection of print–quality and one–of–a–kind photos from Lourdes ! 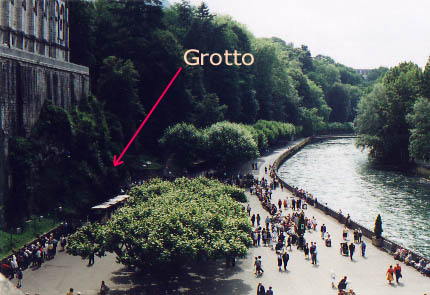 "Catholic Pilgrims of Mary and Jesus" is devoted to collecting and sharing the most remarkable and irrefutable events and truths of the Catholic tradition. The factual content is arguably among the most compelling found anywhere on the Web.  It's wealth of information and images, mostly from private sources, all concern various modes of Christian inspiration for our souls.  A virtual pilgrimage, you may discover within these pages the seeds of your own inspiration. "I do not promise to make you happy in this world, but in the next" ... These words spoken by Mary to Bernadette at the third apparition on February 18, 1858 were a prophesy of Bernadette's life. This was the promise in return for Bernadette's total compliance with the will of the heavenly Mother. The happiness promised to Bernadette was not only intended for life after death. It is a happiness experienced by all those who progress in the way of prayer; who go beyond prayerful words to the discovery of true Prayer. It was this experience that Bernadette came to discover as she knelt before Our Lady. She went beyond the mere recitation of the rosary to savor the deeper experience of a loving communion, "of a friend speaking to a friend." There at the Grotto, Bernadette's deeply prayerful experience silently touched the hearts of all who watched, and crowds began to form in ever greater numbers as the famous Fortnight of Apparitions progressed.
The Lady took the rosary that she held in her hands and she made the sign of the cross. Then I commenced not to be afraid. I took my rosary again; I was able to make the sign of the cross; from that moment I felt perfectly undisturbed in mind. I knelt down and said my rosary, seeing this Lady always before my eyes. The Vision slipped the beads of her rosary between her fingers, but she did not move her lips. When I had said my rosary the Lady made a sign for me to approach, but I did not dare. I stayed in the same place. Then, all of a sudden, she disappeared. I started to remove the other stocking to cross the shallow water near the grotto so as to join my companions. And we went away. As we returned, I asked my companions if they had seen anything. 'No,'; they replied. 'And what about you? Did you see anything?' 'Oh, no, if you have seen nothing, neither have I.' " "I thought I had been mistaken. But as we went, all the way, they kept asking me what I had seen. I did not want to tell them. Seeing that they kept on asking I decided to tell them, on condition that they would tell nobody. They promised not to tell. They said that I must never go there again, nor would they, thinking that it was someone who would harm us. I said no. As soon as they arrived home they hastened to say that I had seen a Lady dressed in white. That was the first time.